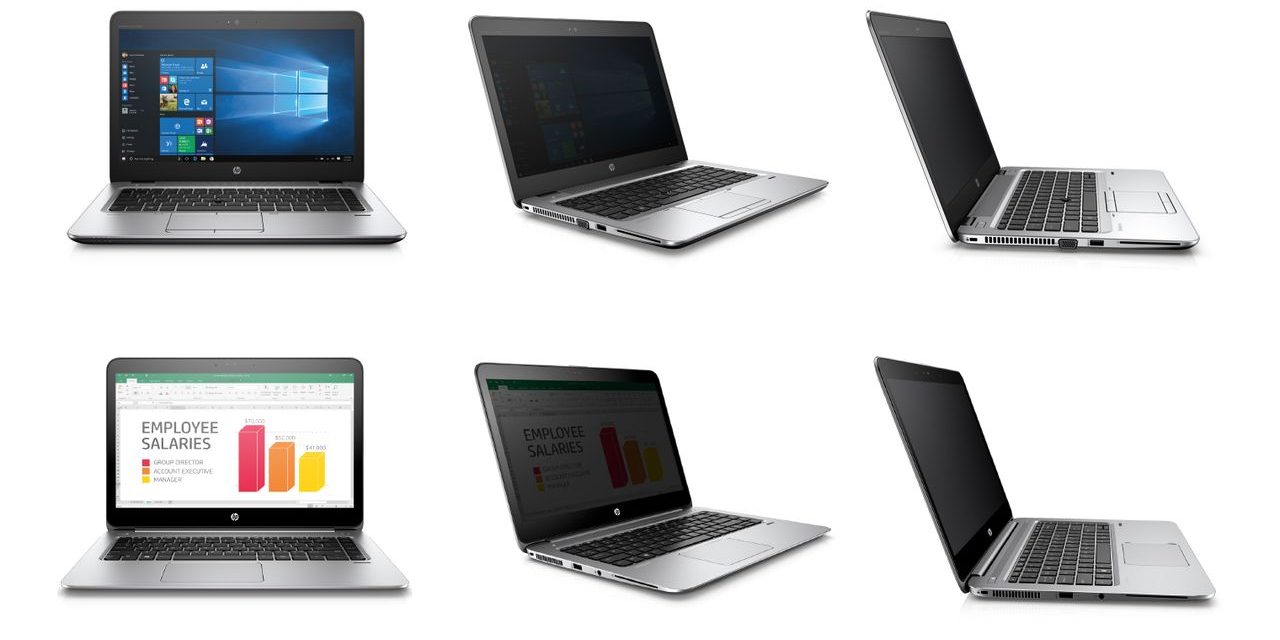 HP’s new laptop screen can prevent people from spying on you
HP developed a new screen that can cut off viewing angles with the press of a button, making it much harder for anyone on either side of a laptop to see what’s being displayed. The feature is called Sure View and works by preventing light from shooting off to the side. That way, when it’s active, you should only be able to see the laptop if you’re facing more-or-less straight on, within the the 70-degree arc right in front of it; 95 percent of light directed to either side of that is supposed to be cut off. What’s interesting about HP’s privacy filter is that it can be turned on and off by pressing a keyboard shortcut. That way you can leave it off when you don’t need it, so you’re not always staring at a dark screen. Starting in September, the Sure View screen will be available on two HP laptops: the EliteBook 1040 and EliteBook 840. It has a 1080p resolution and can support touch.
You can read more here.

Nexus smartphones to get Project Fi Wi-Fi Assistant feature
Wi-Fi Assistant, which helps users save on data by connecting to “verified” Wi-Fi hotspots, will soon be available to all Nexus users running Android 5.1 or higher. Behind the scenes, Wi-Fi Assistant connects via a Virtual Private Network or VPN, which is why users will see “Network may be monitored” warnings when using the feature. As devices will be connecting to open, public hotspots, this is a necessary feature to protect the user’s privacy and security. Google claims that even it can’t record content, although it does monitor the traffic for abuse and to comply with local laws.
More info can be found here.

Fujifilm debuts improved X-A3 mirrorless and fast, weather-proof 23mm lens
With a revised, retro-inspired design that’s intended to appeal to a younger generation of photographers, the X-A3 features a newly developed 24.2MP APS-C CMOS sensor. Unfortunately, although the megapixel count is similar, it isn’t the same sensor or image processor as you’d find in the X-Pro2 and X-T2, Fuji’s high-end mirrorless offerings. It does, however, have expanded focus modes and, of course, a few million more pixels on it. You’ll be able to pick up the X-A3 for $600 with the standard 16-60mm F3.5-5.6 kit lens, or less without.
You can read more here.

Meizu unveils YunOS-Powered U10 & U20 smartphones
Both of these devices sport a metallic chassis which is placed in between two glass panels. The Meizu U10 features a 5-inch display (resolution unknown), along with 2GB / 3GB of RAM and 16GB / 32GB of native storage. This phone is fueled by an octa-core SoC, and a 2,760mAh non-removable battery is also included in this package. The 13-megapixel camera is placed on the back of this smartphone, while a 5-megapixel snapper can be found on its front side. The Meizu U20 sports a 5.5-inch fullHD panel, 2GB / 3GB of RAM and 16GB / 32GB of native storage. The 3,260mAh battery comes with this device, and you’ll also get the same camera setup here as on the Meizu U10.
More specs are available here.

Google is already working on Android 7.1
There was a host of features leaked before the launch of Android Nougat 7.0 including Nexus launcher, Google Assistant, new navigation bar icons and mock animations to go with the navigation bar icons. All these features were absent at the launch, making people think that these features have already been dropped off from active development. Google right after the launch of Android Nougat 7.0 announced that the company will be switching to quarterly maintenance updates from the once a year major releases. According to crash logs Google is planning to bump the maintenance version to 7.1. The version was spotted from Google’s crash and report filter in the developer console.
You can read more details here.

World’s first self-driving taxis debut in Singapore
Select members of the public will be able to hail a free ride through their smartphones in taxis operated by nuTonomy, an autonomous vehicle software startup. The service will start small – six cars now, growing to a dozen by the end of the year. The ultimate goal, say nuTonomy officials, is to have a fully self-driving taxi fleet in Singapore by 2018, which will help sharply cut the number of cars on Singapore’s congested roads. Eventually, the model could be adopted in cities around the world, nuTonomy says. For now, the taxis only will run in a 2.5-square-mile business and residential district called “one-north,” and pick-ups and drop-offs will be limited to specified locations.
If you want to now everything about this subject click here.

Smartphone speech recognition can text 3 times faster than you can type
Computer dictation is a whole lot better than it was a decade ago, but exactly how much better? That was a challenge computer scientists from Stanford University, the University of Washington, and Chinese tech giant Baidu recently took on in an experiment pitting humans against the latest cutting-edge speech recognition software in both speed and accuracy.
Baidu’s Deep Speech 2 cloud-based speech recognition software is based on a deep learning neural network: an impressive machine learning tool that is able to train itself by analyzing enormous datasets of real speech.
You can see a demo and read more here.