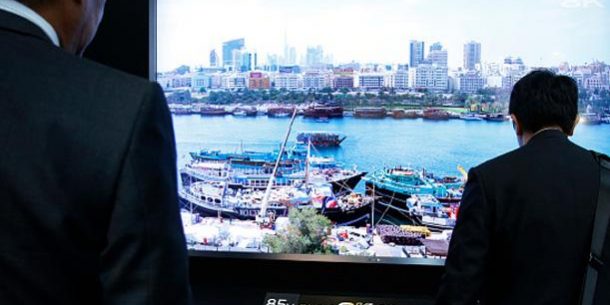 Japan’s NHK begins world’s first 8K TV broadcasts
The country will have the world’s highest resolution Olympics coverage. Japan began the world’s first regular 8K television broadcasts on Monday, five days ahead of the opening of the Olympic Games. 8K refers to broadcasts with a resolution of 7,680 x 4,320 pixels. That’s 16 times the resolution of today’s full high-definition (FHD) broadcasts and four times that of the 4K standard, which is only just emerging in many other countries.
You can read more about this subject here.

Android will tell you when new devices access your Google account
Google is introducing native Android notifications that pop up whenever a new device accesses your account, giving you a chance to change your password before an intruder goes on a shopping spree using your credentials. If you’re ever suspicious, it takes one tap to review what happened.
The feature is rolling out gradually, and Google notes that it make take over two weeks for some people to see the change. Whenever it does arrive, it should provide a useful safeguard against data breaches and the surprise bills that frequently follow.
More info are available here.

Xiaomi Redmi 3S set to launch on Wednesday
The Xiaomi Redmi 3S is another variant of the Redmi 3, with the addition of the fingerprint scanner at the back. It supports a hybrid dual-SIM (Micro + Nano) slot, and runs on Android 5.1 Lollipop-based MIUI 7. The Redmi 3S features a 5-inch HD (720×1280 pixels) IPS display, and packs an octa-core Qualcomm Snapdragon 430 processor clocked at 1.1GHz clubbed with the Adreno 505 GPU. The Redmi 3S sports a 13-megapixel rear camera with PDAF (phase detection autofocus), f/2.0 aperture, HDR mode, 1080p video recording, and LED flash.
More specs can be found here.

Huawei unveils Honor Note 8 with a massive 6.6-inch display
The screen on the new phablet is of the QHD (2,560 x 1,440 resolution, ~443 PPI), 2.5D curved Super AMOLED variety that’s driven by a HiSilicon Kirin 955 octa-core processor (four Cortex-A72 cores @ 2.5GHz and four Cortex-A53 cores clocked at 1.8GHz) and a Mali-T880 MP4 GPU alongside a healthy 4GB of RAM and up to 128GB of local flash storage (expandable via microSD card up to 256GB).There’s a 13-megapixel, f/2.0 aperture camera on the rear with autofocus, optical image stabilization and dual LED flash, a 5-megapixel front-facing shooter with f/2.0 aperture that’s capable of 1080p recording, 802.11 a/b/g/n/ac dual-band Wi-Fi, a USB Type-C connector, dual SIM support, a 3.5mm audio jack and so on.
All the features are available here.

Scientists develop a flexible display that you can cut to size with scissors
As demand for flexible displays grows (think wearables and the like), being able to cut a display for a custom fit suddenly becomes quite desirable which is where the research comes in. Researchers at the National Institute for Materials Science (NIMS) in Japan used a polymer with electrochromic properties (organic/metal hybrid polymer) to create a display that can be cut into any shape using ordinary scissors. Once cut, the display requires just a few seconds of electrical input to adjust to its new shape. The researchers say they’ve even developed a variant that is capable of functioning while detached from a power source and after being cut.
You can read more here.

Infinite corridor lets you walk forever in Virtual Reality
Developed by researchers at the Tokyo and Unity Technologies Japan, the project calls for a new type of “Visuo-Haptic” VR experience, which reportedly creates the illusion of an infinite virtual corridor in a “play space” measuring just 16 feet by 22 feet.
Called “redirected walking,” the technology basically tricks the subject’s brain into thinking that he or she is walking in a straight line when, in fact, the subject is walking on a slight curve. Extrapolate that slight curve into a full circle and it essentially creates a limitless play space in which someone could walk forever without hitting a wall — or realizing they’re walking in circles.
All the details about this project are available here.

Apple insists that iPad Pro is now a computer
Perhaps the company is coming around to the idea that a computer is whatever you decide a computer is.
The article is referring to an add that Apple has just released, that suggests the iPad Pro is, indeed, a computer.
Here we see it going through various transformations with the help of various, not entirely cheap, add-ons.